The Pompeii de Las Palmas (PDLP) complex is a nine-unit property located in the historic Old Las Palmas neighborhood. Originally constructed in 1964 as apartments, the complex was converted to condominiums in 1969. The PDLP complex is a beautiful example of modernist architecture in the quirky Roman Revival style. Possibly of more importance, the PDLP complex is an excellent example of a vanishing and endangered building type: the “small” seasonal rental property or hotel/apartment.

On March 10, 2015 the city of Palm Springs’ Historic Site Preservation Board met and voted 6-1 to forward a proposed resolution to the city council to create the PDLP historic district.

On May 22, 2014 PSPF was provided with various documents of owner support indicating that more than two-thirds of the PDLP owners supported pursuing historic district status. 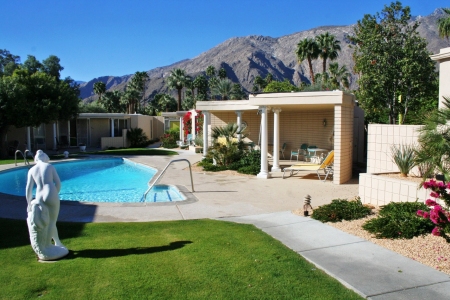