On September 9, 2012 PSPF board member Vincent Williams reported to the PSPF board that he viewed the proposed street-widening project as having a relatively “minimal impact” on the Kenaston Residence’s site and recommended that PSPF not oppose the project. The Kenaston Residence advocacy was initiated by PSPF due to concerns that a street-widening project could have a negative impact on the historic Kenaston Residence. More importantly, PSPF was concerned that the city of Rancho Mirage had failed to have the city’s Historic Resources Commission review the project. The advocacy was viewed as a success insofar as the city council did delay (i.e., “continue”) the matter until the Historic Resources Commission provided an assessment of the impact of the project. On August 14, 2012 PSPF board member Vincent Williams attended the Rancho Mirage Historic Resources Commission meeting. The meeting included an official site visit by the commissioners to the area around the Kenaston Residence most affected by the city’s street-widening project. After carefully reviewing the proposed construction plans, there seemed to be general consensus among the commissioners (and Williams) that the impact of the proposed project would be minimal. At the June 21, 2012 Rancho Mirage city council meeting PSPF board member Ron Marshall asked the council to delay a decision on the project to give the city’s Historic Resources Commission time to assess the impact the street widening project may have on the modernist residence. A street-widening project on Kaye Ballard Lane and Desert Sun Ranch Street in Rancho Mirage threatens to impact the street frontage and impact the site of the historic Kenaston Residence (E. Stewart Williams, 1957). The Kenaston Residence is prominently featured in PSPF’s 2005 tribute journal E. Stewart Williams: A Tribute to His Work and Life. 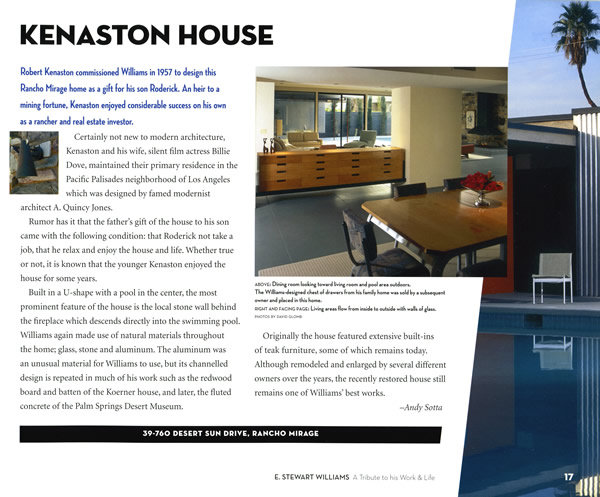