On January 24, 2018 the Palm Springs city council unanimously approved (4-0) the Class 1 Historic Site designation of the Schwartz Residence thereby setting an important legal precedent and rendering the PSPF legal action moot. The city had previously refused to process the Schwartz nomination as the structure was located on formerly tribal land. PSPF’s August 2017 legal action argued the land was now privately-owned and that the tribe’s desire to assume State Historic Preservation Office duties did not relieve the city of its obligation to process local Class 1 Historic Site nominations. PSPF deemed this legal action critical to the health of historic preservation as the city’s policy disenfranchised thousands of property owners from the benefits of historic designation. As a direct result of PSPF’s pro-active legal action, owners who found themselves in this common property status (i.e., private ownership of formerly tribal land) can now proceed with their historic nominations.

In an October 11, 2017 letter from the ACBCI attorney to the Palm Springs city attorney, the tribe stated that they have “no objection to the City exercising jurisdiction over fee parcels when dealing with a Local Register historic designation…” The tribal opinion aligns with PSPF’s opinion. It also supports PSPF’s contention that the city of Palm Springs has misinterpreted the scope of the tribe’s assumption of State Historic Preservation Officer (SHPO) duties for tribal lands. To read the tribal attorney’s letter click here.

On August 17, 2017 PSPF’s attorney filed a 12-page “Petition for Peremptory Writ of Mandate and Complaint for Declaratory and Injunctive Relief” with the Superior Court of California for the County of Riverside. In the complaint PSPF argues that the city has an obligation to process the Schwartz Class 1 Historic Site nomination and that the city has misinterpreted recent tribal assertions of historic preservation authority over formerly tribal land and, further, that the tribe’s desire to take on State Historic Preservation Office (SHPO) duties does not impact the city’s obligation to process local designations. To read the entire petition click here.

On August 11, 2017 PSPF’s attorney filed a “Notice of Intent to Commence Litigation Against the City of Palm Springs” with the Palm Springs city council. To read the notice click here.

On April 26, 2017, PSPF’s attorney sent a follow-up letter to the Palm Springs city attorney again asserting that the city was obligated to process the Class 1 Historic Site nomination of the Schwartz Residence. The letter concludes with, “Should the City continue to insist that the Tribe has properly assumed the responsibility to evaluate PSPF’s application, we see no alternative but to bring suit in the Superior Court to compel the City to officially commence the process of evaluating PSPF’s Class 1 Historic Site application for the Schwartz Residence forthwith.” To read the PSPF attorney’s letter click here.

On March 14, 2017, the tribe enacted Interim Ordinance No. 49, formally entitled “An Interim Ordinance of the Tribal Council of the Agua Caliente Band of Cahuilla Indians Adopting a Moratorium on the Filing and Submission of Applications for the Nomination of Historic Properties to be Listed in the National Register and for the Listing of Tribal Historical and Cultural Resources in a Tribal Register.” The interim tribal ordinance unilaterally asserts that in addition to National Register duties the tribe desires a “separate Tribal Register.” The tribe’s interim ordinance uses the phrase “Tribal and allotted trust lands” but has previously asserted this phrase includes land that has been sold to private parties if it falls within the tribe’s “historic boundaries.” Finally, the tribe’s interim ordinance purports to shut down the processing of historic nominations for a full year while the “Tribal staff…develop[s] appropriate regulations.” The interim ordinance, which is to expire in a year, also provides for the adoption of an extension ordinance. This interim ordinance’s assertion of new tribal historic preservation duties and responsibilities brings into question the sincerity of the tribe’s commitment as they have yet to create a process to handle historic nominations. To read Tribal Interim Ordinance No. 49
click here.

On February 14, 2017 the city of Palm Springs finally responded to PSPF’s FOIA request but withheld an unknown number of documents “protected by the attorney-client privilege and the attorney work product doctrine.” The documents that were provided by the city gave little insight into the city’s position on the tribal preservation claims. However, the documents may show that the city is operating largely on verbal guidance from the city attorney.

On February 6, 2017 PSPF sent a letter to the Palm Springs city manager forwarding a three-page legal opinion regarding the city’s handling of the Abe & Marion Schwartz Class 1 Historic Site nomination. In the cover letter, PSPF asserts that “our attorney has advised us that he believes, pursuant to the Palm Springs municipal code, only the city is authorized to process the Schwartz nomination. He believes the tribe has no authority to process and act on a nomination in the first instance, unless the 1977 Land Use Agreement between the city and the ACBCI is amended.”  Read the PSPF Letter and Legal Opinion

On January 30, 2017 PSPF sent a letter to the Palm Springs city clerk stating that “Despite two extension notifications by the city (dated December 29, 2016 and January 12, 2017), we have still not received a response to our December 17, 2016 Freedom of Information Act (FOIA) request,” and further, “Please provide us with either a response to our FOIA request, or provide us with an estimated date of response.”

On January 12, 2017 PSPF received a second letter from the city of Palm Springs informing PSPF that the response to the foundation’s December 17, 2016 FOIA request was “still in the process of being assembled” and that the city “will notify you [PSPF] of the estimated date of production.” To read the city’s letter click here.

On January 10, 2017 PSPF board member Ron Marshall made public comment before the Palm Springs Historic Site Preservation Board. Marshall’s comments addressed recent jurisdictional claims regarding historic preservation by the ACBCI and concluded with, “This is a complex and nuanced issue and not as straightforward and simple as expounded upon at the December HSPB meeting.”

On January 4, 2017 PSPF board member Ron Marshall made public comment before the Palm Springs city council regarding recent tribal claims of historic preservation jurisdiction over “historically tribal land” even if that land is currently privately owned. Marshall told the council that this “creates the real possibility that decades of preservation work could be undone and new preservation efforts obstructed.”

On December 29, 2016 PSPF received a notification from the city of Palm Springs informing PSPF that the response to the foundation’s December 17, 2016 FOIA request would be delayed until January 12, 2017. To read the city’s letter click here.

On December 17, 2016 PSPF sent a Freedom of Information Act (FOIA) request to the city of Palm Springs asking for copies of all public records regarding “tribal historic preservation policy and procedures.” The scope of the FOIA request includes correspondence produced by city council members, the city manager, the city attorney and the Planning Services Department staff. PSPF opined that, “the disclosure of the requested information is in the public interest and will contribute significantly to the public’s understanding of the Tribe’s influence on city government operations.” To read PSPF’s FOIA request click here.

On December 13, 2016 PSPF sent a letter to the city of Palm Springs pointing out that the Schwartz Residence was on land that had been “privately owned for more than 50 years,” and that many of the city’s important historical resources were likewise located on privately owned but also located on historically tribal land. The PSPF letter further went on to say that, “even as the future role of the tribe in historic preservation within the city is being clarified, it would be appropriate for the city to continue with its established historic preservation process by acting on PSPF’s nomination of the Abe & Marion Schwartz Residence” and that, “it is poor public policy to indefinitely stall the proper administration of city processes, especially those specifically directed by the city’s municipal code (i.e., PSMC Chapter 8.05).” Finally, the letter asked that the city “immediately resume” the processing of the Schwartz Residence nomination.  Read the PSPF Letter

On November 2, 2016 PSPF received an email from the city of Palm Springs Planning Services Department, stating that the Schwartz Residence nomination was “on hold” pending the city attorney’s review of recent correspondence from the ACBCI.

On October 24, 2016 PSPF delivered the Class 1 Historic Site nomination of the Abe & Marion Schwartz Residence (1964, Hal Levitt) to the city of Palm Springs. PSPF expected the nomination, which had the unqualified support of the owners, to be processed quickly and without controversy.

On December 2, 2015 the ACBCI sent a letter to the city of Palm Springs asking that the city consider and approve a “supplement” to the current “Tribal/City Land Use Agreement” of July 26, 1977. That supplement was the tribe’s “Policy Statement Regarding Historic Preservation” of May 8, 2015.  Read the ACBCI Letter

On June 29, 2015 the ACBCI sent a letter to the city of Palm Springs forwarding the tribe’s “Policy Statement Regarding Historic Preservation” of May 8, 2015. Essentially, the tribe asserts themselves as the “designated steward” of “historic and cultural resources on all lands within the exterior boundaries of the Agua Caliente Indian Reservation, regardless of land status, as well as the Tribe’s Traditional Use Area” (emphasis added).  Read the ACBCI Letter and Policy Statement

To see the “Land Status” map produced by the Agua Caliente Band of Cahuilla Indians (ACBCI) (as of December 2016) click here. Areas of the tribal map colored light beige are not directly affected by the ACBCI’s recent claims (e.g., Sections 3, 11 and 13). 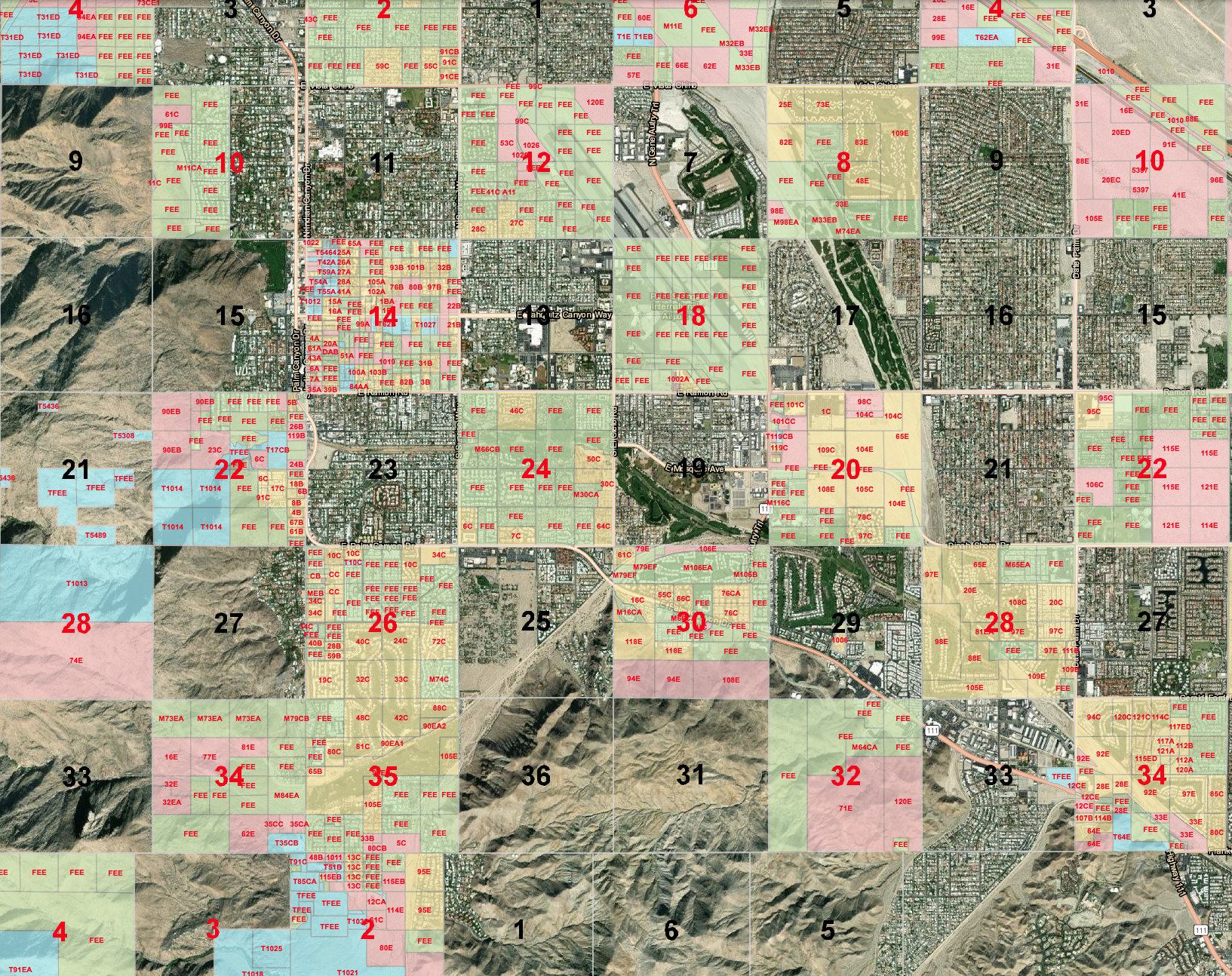