Built in 1958, this Alexander Construction Company (ACC) tract house was part of the Enchanted Homes development. The ACC product marries a Palmer & Krisel “Ramon Rise” floor plan with exterior elevation facade treatments done by a designer engaged by ACC partners George Alexander and Joe Dunas. This model was a popular design of the Enchanted Homes development and can be found on both the east (Sunmor) and west (Sunrise) sides of Farrell Drive.

In June of 2022, after its close brush with demolition and following an extensive renovation effort, property records show that the home sold for $1,875,000.

On July 18, 2017 PSPF board members Erik Rosenow and Jim Harlan met with city planning staff and neighborhood representatives to discuss possible paths forward for the protection of 252 North Sunset Way and the surrounding neighborhood of Alexander Construction Company-built tract homes.

On July 11, 2017 the HSPB voted unanimously to stay the demolition of 252 North Sunset Way. Making public comment in opposition to the demolition were nearby residents, representatives of neighborhood organizations and PSPF board members Erik Rosenow and Jim Harlan. Rosenow stated, “Speaking with many of Sunmor’s residents, the common thread is that they bought their homes in a…cohesive and well-preserved midcentury neighborhood…[and] are highly concerned about this demolition.”

On July 7, 2017 PSPF sent a letter to the city’s Historic Site Preservation Board (HSPB) strongly objecting to the proposed demolition of the Alexander Construction Company-built residence at 252 North Sunset Way. In the letter PSPF stated that, “All too frequently such demolitions lead to ill-advised new construction that is out of scale and out of character with the surrounding neighborhood. In short, the replacement is never as good as the original.” To read the PSPF letter click here. 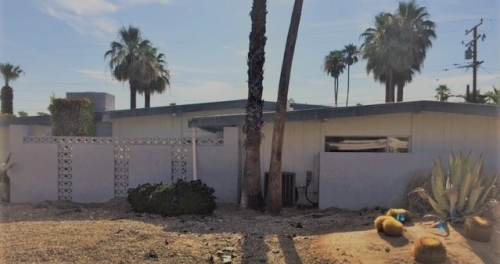 A similar Alexander tract house design in the Sunmor neighborhood.

This Enchanted Homes advertisement appeared in the March 7, 1958 issue of the Desert Sun newspaper.