The Village Manor was designed by architectural designer Herbert Burns in 1955. The small hotel still features many of the original interiors (including pink tile bathrooms) and was one of the first midcentury hotels in Palm Springs to be sympathetically rehabilitated. The hotel operates today as the Orbit In and has gained national recognition as one of Palm Springs’ “destination hotels” with its sublime midcentury architecture and desert resort ambiance.

On January 13, 2016 the Palm Springs city council unanimously approved (5-0) the Class 1 Historic Site designation of the Village Manor. Making public comment in enthusiastic support of the nomination was PSPF board member Barbara Marshall who congratulated the author for the well-written nomination. Marshall also recognized the continuing stewardship of the current owners.

On June 9, 2015 the city of Palm Springs’ Historic Site Preservation Board met and voted unanimously (7-0) to forward a proposed resolution to the city council to designate the Village Manor a Class 1 Historic Site. 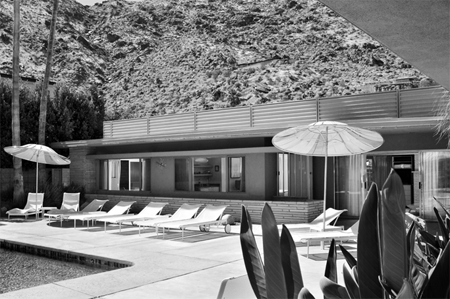