Until recently a Shell Gas Station, this commercial building was designed by architect William F. Cody in 1964. This is the last of five architect-designed midcentury gas stations in Palm Springs that is still operating as a gas station. In 2004, the gas station was included in Palm Springs’ city-wide historic resources survey. The survey opined that “the gas station appears to meet the level of significance necessary for individual National Register of Historic Places or California Register of Historical Resources eligibility.”

On January 4, 2017 the Palm Springs city council unanimously approved (5-0) the Class 1 Historic Site designation of the Shell Gas Station. PSPF board member Barbara Marshall made public comment before the city council stating, “we enthusiastically support the Class 1 historic designation of the William Cody-designed Shell Gas Station at 2796 North Palm Canyon Drive. It is the last of the midcentury architect-designed gas stations still functioning as such and is both a design and engineering marvel. Almost 50 years ago, in September of 1967, Palm Springs Life magazine published an article entitled ‘Garish Gas Stations? Not in Palm Springs’ which expounded on the architectural significance of the city’s non-corporate, architect-designed gas stations. In that article the author applauded how forward-thinking the city’s Planning Commission was. It set a standard that every commission since has tried to surpass…I’d like to applaud the efforts of…councilmember Mills, the Planning Department, specifically Director Flinn Fagg and city planner Ken Lyon. The city’s Historic Site Preservation Board, led by Gary Johns also did yeoman’s work on this designation as did citizens like Robert Imber and our sister organization the Palm Springs Modern Committee.”

On October 11, 2016 PSPF board member Barbara Marshall made public comment before the Palm Springs Historic Site Preservation Board in support of the Class 1 Historic Site nomination of the Shell Gas Station. Marshall stated PSPF’s support of the Architectural Resources Group (ARG) study which determined that there was substantive cause to proceed with the Class1 designation of the gas station. To read the ARG study click here.

On June 30, 2016 PSPF was informed by a Palm Springs city planning department representative the contract for professional services to investigate the historicity of the Shell Gas Station would be awarded to Architectural Resources Group “next week.”

On May 25, 2016 the Palm Springs Planning Commission heard the proposed modifications to the Cody-designed gas station. Making public comment on the issue was PSPF board member Gary Johns and PSModCom board members Jade Nelson, Robert Imber and Peter Blackburn. The Planning Commission deferred action on the item pending a determination as to whether or not the gas station qualifies as a Class 1 Historic Site.

On January 12, 2016 the Palm Springs Historic Site Preservation Board voted to “initiate a study pursuant to Municipal Code Section 8.05.135 (Investigation and Study) of the [Shell Gas Station] to inform the board of its possible historic significance.”

On September 2, 2015 the Palm Springs city council upheld the PSModCom appeal of the Planning Commission’s June 10, 2015 approval decision and returned the matter to the commission for “consideration of all [of the] Historic Site Preservation Board recommendations.” This included the HSPB’s recommendation to initiate the Class 1 Historic Site designation process for the gas station.

On August 31, 2015 PSPF sent a letter to the city of Palm Springs supporting the PSModCom June 19th appeal letter. In the PSPF letter president Erik Rosenow asserted that, “The [Planning] commission’s decision was based on incomplete and incorrect information,” and further that “the owner’s proposal of additions and modifications to this building destroy the architectural fabric of this historically important structure and is patently short-sighted.” Additionally, PSPF included a copy of the September 1967 Palm Springs Life magazine article entitled “Garish Gas Stations? Not in Palm Springs” which explained the architectural significance of the city’s architect-designed gas stations. To read the PSPF letter click here.

On June 19, 2015 PSModCom appealed the Palm Springs Planning Commission’s conditional use permit (CUP) amendment asserting that the amendment “allows an addition to this historic building that would materially alter its historic significance,” and further that the “applicant misrepresented the project to the Planning Commission by repeatedly stating the project would not touch the Cody-designed building. This is not true; the west elevation of the Cody-designed building will be removed to provide wall-less, open interior space for tenant improvements.” To read the PSModCom letter click here.

On June 10, 2015 city staff provided an abbreviated synopsis of the HSPB’s recommendations to the Planning Commission. The commission then approved a conditional use permit which would have substantively altered the historic fabric of the Cody-designed gas station. Unfortunately, the commission did not receive all of the HSPB’s recommendations in the (incomplete) staff report (e.g., the HSPB recommended that the Architectural Advisory Committee review the proposed project, etc.).

On June 9, 2015 the city’s Historic Site Preservation Board reviewed the project, found it flawed on many levels, and provided numerous substantive comments to the Planning Commission.

On May 13, 2015 the Planning Commission heard the proposed changes to the Cody-designed gas station (i.e., “A Conditional Use Permit to Modify Floor Area to Provide Additional Retail Space at the Existing Gasoline Station Located at 2797 North Palm Canyon Drive’) and referred the matter to the city’s Historic Site Preservation Board.

According to Palm Springs city records, in June of 1996 the Planning Commission approved a revision to the original conditional use permit for a “467-sq. ft. retail space [addition].” Apparently, the requirements for this addition were never met and it was never realized.

According to Palm Springs city records, a building permit was issued in August of 1984 to “remodel and add 1,485-square feet” of retail space.

In September of 1967 Palm Springs Life magazine published an article entitled “Garish Gas Stations? Not in Palm Springs” which expounded on the architectural significance of the city’s non-corporate, architect-designed gas stations. To read the article click here. 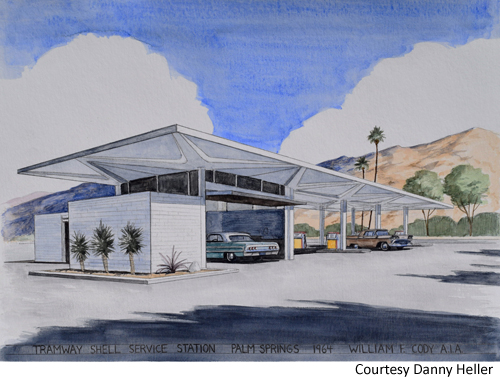