In May of 2011, RHE completed the installation of the sixth, and final, tiki apex funded under PSPF’s grant program. According to RHE HOA President Bill Lewallen, “The generous support of PSPF provided the impetus for the next restoration project which is currently under study. Our Adopt a Tiki Apex Project has evolved into a plan to restore other architectural elements of the complex.” In all PSPF grant monies to the RHE HOA have totaled $3,470.

On September 2, 2010 the PSPF board approved a $1,770 preservation grant to the RHE HOA for the fabrication of five tiki apexes to be installed around the perimeter of the RHE complex.

On July 12, 2010 the PSPF board approved a $500 preservation grant to the RHE HOA for the fabrication of a single prototype tiki apex.

On April 29, 2010, PSPF awarded a $1,200 preservation grant to the RHE HOA to contract with the well-respected local architectural firm of o2 Architecture to design and explore the fabrication feasibility of an architectural element known as a “tiki apex.” The tiki apexes were removed from all of RHE’s “outrigger beams” (another defining feature of tiki- or Polynesian-modern architecture) during the 1990s for a variety of reasons, including deferred maintenance. o2 Architecture relied heavily on 1960s-era vintage photographs to capture the appropriate scale and proportions of the tiki apexes and consulted with modernist architect Donald Wexler on the project. As a condition of the PSPF preservation grant, the RHE HOA pledged to pursue the necessary certificate of approval required by the city’s Historic Site Preservation Board. RHE (designed by the firm of Wexler & Harrison in 1960) was designated Palm Springs’ first residential historic district in February of 2010. 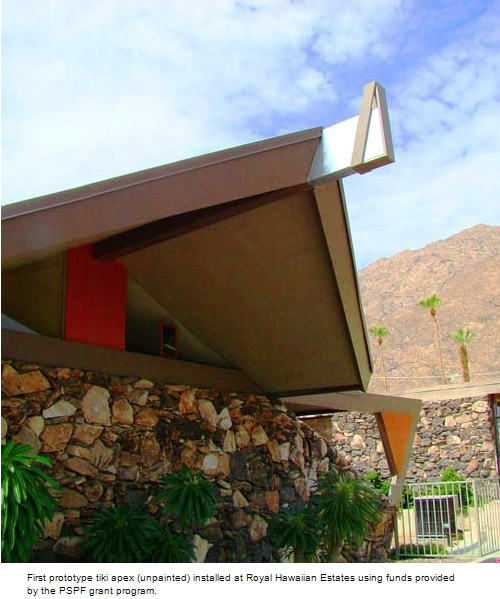