Inspiration Point, also known as The Promontory, is one of the Coachella Valley’s most visible landmarks. Located on the lower slopes of Mount San Jacinto above the O’Donnell Golf Course, Inspiration Point was constructed between 1934-1935 and is a physical manifestation of the legacy of Thomas A. O’Donnell, one of the most significant figures in the history and development of Palm Springs.

On December 19, 2019 the Palm Springs city council voted unanimously (3-0) to approve the Class 1 Historic Resource designation of Inspiration Point. PSPF member Steven Vaught (the author of the nomination), PSPF board member Jan Harper, and PSPF honorary board member Hugh Kaptur, made public comment in support of the designation. A notable condition attached to the designation is that “the flat open space of the Promontory” is not included as a defining characteristic.

On December 16, 2019 PSPF sent a letter to the Palm Springs city council stating that, “It is our strong opinion that including the promontory platform in the designation is most beneficial to the community and the city. This opinion is consistent with the Historic Site Preservation Board’s recommendation.”

On April 9, 2019 the city’s Historic Site Preservation Board voted (4-2) to recommend to city council approval of the Class 1 Historic Site designation of Inspiration Point. PSPF board member Jan Harper and nomination author Steve Vaught made public comment in support of the nomination.

On December 13, 2018, PSPF submitted the 64-page Class 1 Historic Site nomination for Inspiration Point to the city of Palm Springs’ Historic Site Preservation Board.

In July of 2018, the PSPF board of directors assigned the task of writing Inspiration Point’s Class 1 Historic Site nomination to Steve Vaught. 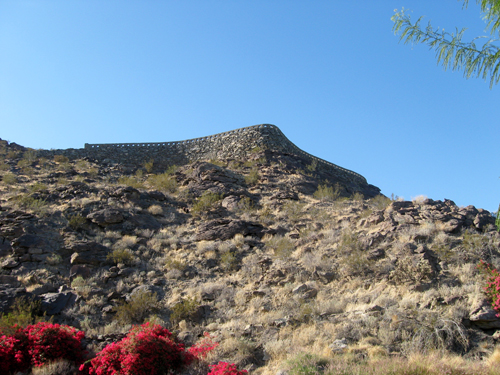