The following information about the Carnell Building is found in Desert Spanish: The Early Architecture of Palm Springs by PSPF board member Patrick McGrew: “As was the case with many moneyed Easterners, Julia Carnell [heiress to the National Cash Register fortune] often wintered in Palm Springs. In 1934, at the suggestion of local realtor Robert Ransom, Carnell acquired the site of the original First Community Church for $40,000 and built her first Palm Springs project, the Carnell Building. She chose Schenck & Williams, whose work she already knew from their Dayton projects for NCR, to design the building. This project introduced Harry Williams to the desert which would become his home, as well as the home of his sons Roger and Stewart. The property was designated a Class Two Historic Site to mark the location of the church that once stood on the site. Given the historic importance of the people involved, the Carnell Building could easily qualify as a Class One Historic Site. Unfortunate, but easily remedied alterations blunt the integrity of the original design.”

On June 22, 2013 the city of Palm Springs’ Director of Planning Services reported that “plans had been submitted” to rebuild the historic Carnell Building’s burned-out second floor.

On August 22, 2012 the Desert Sun reported that the city staff obtained a permit to begin rebuilding the Carnell Building.

On July 11, 2012 an early morning fire at the Carnell Building at 184-196 North Palm Canyon Drive caused extensive second-floor damage to the structure. Later, the effort to bring the fire under control caused significant water damage to the first floor of the building. Initially misreported by the media as a fire at the historic Town & Country Center (1948), the cause of the Carnell Building fire is under investigation. 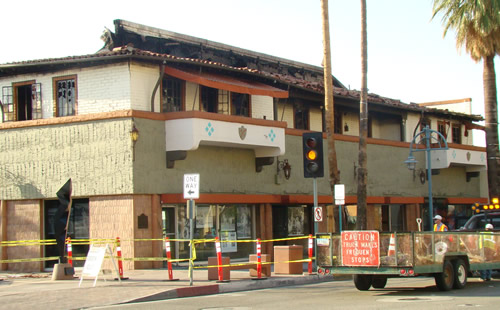