Started by actors (and tennis enthusiasts) Charlie Farrell and Ralph Bellamy in 1934, the Racquet Club was a modest enterprise consisting of only a snack bar and two tennis courts. However, from the beginning, the Racquet Club attracted the residents of the nearby movie colony. Early visitors included Humphrey Bogart, Errol Flynn, Lana Turner and others. With the building of the Racquet Club swimming pool in 1935, the club’s expansion was underway. The dining room was enlarged in 1937 and again in 1951. In 1946, 35 cottages were built along the banks of Netcher’s Creek (which winds through the club’s grounds). More cottages were added in 1956 to accommodate the increasing numbers of visitors to the club. Probably the most succinct history of the creation of the Racquet Club appears in the 1960-61 Annual Pictorial edition of Palm Springs Life magazine in an article entitled “The Racquet Club: Movie Colony Hideaway.”

On July 23, 2014 a significant portion of the historic Racquet Club fell victim to a suspicious fire. Presciently, the Racquet Club was identified as an endangered historic property in a PSPF letter to the mayor of Palm Springs on October 10, 2013. In that PSPF letter, the Racquet Club was named #2 in the foundation’s list of top 5 properties potentially in danger of fire or demolition by neglect. The PSPF letter also pointed out that the city’s lax enforcement of the Vacant Building ordnance had helped create the conditions that has led to these fires. 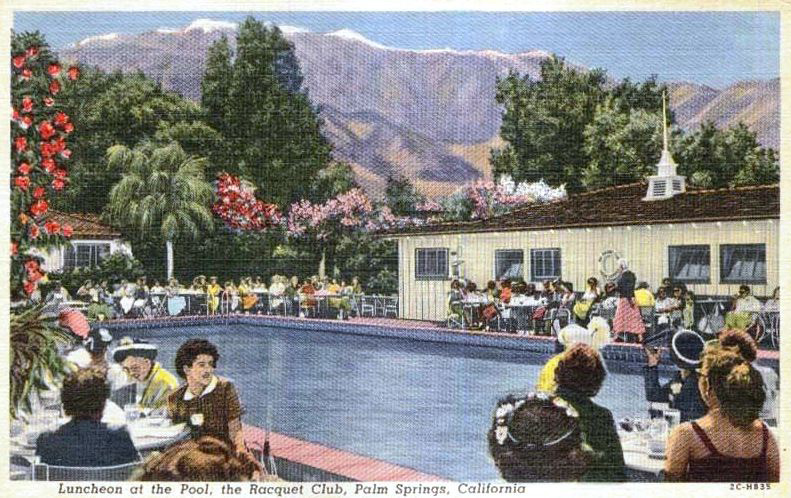