On May 18, 2011 PSPF board member Ron Marshall and volunteer John Rivera made public comment at the Riverside County Historical Commission meeting. In their comments, Marshall and Rivera emphasized the importance of keeping the first-rate rehabilitation of the North Shore Yacht Club “intact.”

In early May of 2011 PSPF was made aware of a Riverside County Economic Development Agency proposal to convert the second floor “Compass Room” of the North Shore Yacht Club (NSYC) into a teen center. The proposal removes the beautiful and architecturally striking suspended lobby stair, replaces it for a wider one, and adds a second stairway to the seaside exterior. Even more alarming, the proposal adds a lobby elevator which would take a huge bite out of the entry area and would rise through and above the second floor roof. These changes would drastically, and negatively, impact both the interior and exterior character of the historic building.

According to architect John Rivera, the Project Architect for the rehabilitation of the NSYC while at Holt Architects, “great pains” were taken to retain many of the original design elements of the yacht club. “There were reasons why we didn’t install an elevator then, all of which had to do with keeping the original design,” says Rivera, “and I seriously doubt that the same level of care would be taken this second time around. Given that there’s been such broad support and approval of the recent rehabilitation of the NSYC, it seems a crime to needlessly alter its iconic design now, for the mere purpose of a quick and cheap teen center…which will certainly prove its ill conception in a short time.”

If there is a valid need for a teen center to serve the North Shore community there are other (and possibly less expensive) building options on the NSYC site. For example, the rehabilitation of the yacht club’s “Bait Shop” for use as a teen center offers just one alternative. The rehab of this area would offer about the same square footage at a comparable cost when weighing the costs of a new elevator and new stair and the accompanying demolition and structural reconstruction. Yet another option is constructing an entirely new building to west of the NSYC, which could take advantage of the newly rehabbed restroom building. According to Rivera, “either of these two options would not only save the yacht club from unnecessary change, but would add a new facility that could provide multiple uses and be a win-win for all.”

Questions regarding this advocacy can be directed to:
PSPF volunteer John Anthony Rivera,  john.anthony.rivera@att.net or info@pspreservationfoundation.org. 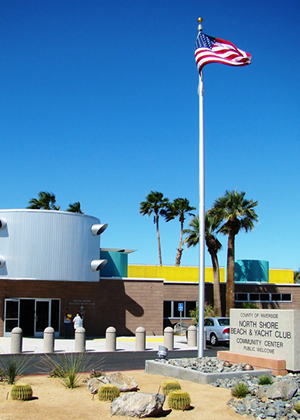