When opened to the public on October 1, 1947 the Town & Desert Apartments (today the “Hideaway”) were described as the “apartments of tomorrow”. Designed by Palm Springs architectural designer Herbert W. Burns, the complex received national attention when it was published in the May 1948 issue of Architectural Record in an article entitled “California Hide-Away, Motel Style.” The 1948 Architectural Record article was lavishly illustrated with photographs by architectural photographer Julius Shulman.

On July 2, 2014 the Palm Springs city council voted unanimously (4-0) to approve the Class 1 Historic Site designation of the Town & Desert Apartments (now the Hideaway). PSPF president Erik Rosenow made public comment in support of the designation stating that “this will be the first [Class 1 Historic Site] designation to recognize architectural designer Herbert Burns, so your action tonight will be making a bit of history in its own right.” Rosenow also lauded the property owners’ many contributions to the community and to Modernism Week.

On June 10, 2014 the Town & Desert Apartments Class 1 Historic Site nomination was reviewed by the city’s Historic Site Preservation Board. The HSPB unanimously approved sending the nomination forward to the city council. PSPF board member Ron Duby made public comment in support of the nomination and HSPB members lauded the quality of the research found in the PSPF submission.

On March 26, 2014 the Palm Springs Preservation Foundation (acting as agent for the owners) submitted the Class 1 Historic Site nomination for the Town & Desert Apartments to the city’s Historic Site Preservation Board. The 40-page nomination was prepared for PSPF by PSPF board members Ron and Barbara Marshall. 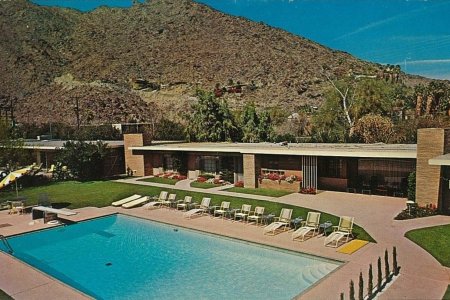