Frank Sinatra’s Twin Palms estate was designed in 1947 by architect E. Stewart Williams of the firm of Williams, Williams & Williams. The estate was named after the two large palm trees that still grace the site. The residence has a number of notable architectural features including tongue-in-groove Douglas Fir for the soaring sloping ceilings, generous use of glass, Arizona flagstone for the chimney stacks, etc. There is also a large swimming pool sheltered on three sides by the main house, pergola and cabana. The house and elements of the site were designated a city of Palm Springs Class 1 Historic Site in 2011.

On October 13, 2011 the PSPF board of directors and homeowners Tom & Marianne O’Connell hosted a recognition ceremony to celebrate the Class 1 historic site designation of the Frank Sinatra’s Twin Palms estate. Councilmember Rick Hutcheson presented the homeowners with a framed copy of the residence’s future entry in PSPF’s Class 1 historic sites booklet.

On December 27, 2010 the Palm Springs Preservation Foundation submitted the Class 1 historic site nomination of Frank Sinatra’s Twin Palms estate to the city of Palm Springs on behalf of homeowners Tom and Marianne O’Connell. Built in 1947 and designed by architect E. Stewart Williams, the Twin Palms residence is one of the finest examples of modernist architecture in Palm Springs. The hoped for historic designation of Sinatra’s former home will ensure that future changes to the property will be approved by the city’s Historic Site Preservation Board.

Local lore recounts that Frank Sinatra walked into architect E. Stewart Williams’ office in late spring of 1947 eating an ice cream cone, snapping his fingers, and saying, “I want to build a house and I want it done by Christmas.” With this important commission, Williams was allowed to put his own unique stamp on modern architecture. Among its many features, the house curls around a large pool in a pinwheel fashion revealing spectacular views of the San Jacinto Mountains from the master bedroom. The Sinatra residence remains remarkably intact and has been only slightly modified over the years (the main entrance configuration was reoriented in the late 1990s).

Unlike many so-called “celebrity homes” having tenuous connections to their namesakes, Frank Sinatra lived in his Twin Palms residence for six years starting in 1947, a significant time in both his personal and professional career, including the period of his tumultuous marriage to actress Ava Gardner. The enduring interest in both Frank Sinatra and modern architecture allows PSPF to hold a popular tour of the home every February during Modernism Week.

The Palm Springs Preservation Foundation selected Patrick McGrew, an architect, author and authority on California’s architectural history to write the historic site nomination. According to McGrew, Sinatra’s residence meets many of the criteria required for eventual historic site designation. Funding for the Twin Palms historic site nomination was made possible through donations from PSPF members Joe and Kim Zakowski & Ron and Barbara Marshall. 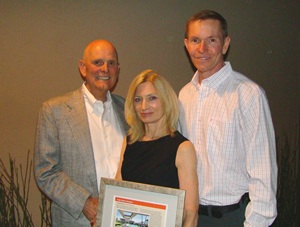