Originally a military barracks, architect Don Wexler’s 1956 modification to the structure transformed the building into an important piece of the city’s modernist architecture. The building’s most notable feature is the concrete and ornamental plaster arcade which is a “fluid form” rarely used by Wexler who is better known for his rectilinear work in steel.

On November 9, 2015 the Wexler & Harrison-designed Ramon Drug Building fell victim to demolition. The tribal allottees’ rush to demolish this building (without a project in place) was shortsighted and failed to appreciate the full context of tribal history in Palm Springs. Moreover, the demolition action injured the community at-large because it failed to understand the economic importance of preserving the city’s modernist architecture.

On November 4, 2015 the Palm Springs city council upheld the appeal of the tribal allottees 4-1 (Foat opposing) paving the way for the demolition of the Ramon Drug Building. PSPF board member Steven Price made public comment in support of the HSPB’s decision to levy the stay of demolition.

On October 31, 2015 PSPF sent a letter to Palm Springs Mayor Steve Pougnet stating, “we strongly recommend that you support the city staff recommendation to deny…[the tribal allottees’] appeal and allow for an investigation into the historic merits of all, or part of, the Ramon Drug Building.” To read the PSPF letter click here.

On October 14, 2015 PSPF was informed that the tribal allottee property owners of the Ramon Drug Building had appealed (through G&M Construction) the 120-day stay of demolition of the building.

On October 13, 2015 the Palm Springs Historic Site Preservation Board (HSPB) voted 5-1 to impose a 120-day stay of demolition on the Ramon Drug Building and tasked city staff to “investigate” the possibility of making the complex a Class 1 Historic Site. PSPF board member Barbara Marshall made public comment in support of the 120-day stay of demolition.

On October 8, 2015 PSPF sent a letter to the Palm Springs Planning Director recommending that a stay of demolition be imposed on the Ramon Drug Building “pending an investigation into the merits of potential Class 1 designation.” To read the PSPF letter click here.

On August 11, 2015, in an email response to a PSPF inquiry concerning the applicability of city codes on tribal “allottee” land, the city of Palm Springs stated, “The property [i.e., the Ramon Drug Building at 440-454 South Indian Canyon Drive] is subject to the City’s land use regulations and permits pursuant to a Land Use Contract approved by the Tribe and City in 1977 (included as Appendix 2 to the City’s Zoning Code), as subsequently amended. All Indian trust lands, with the exception of certain parcels of land directly acquired by the Tribe itself, are subject to the City’s land use review and permitting process as identified in the agreement. However, any decision by the City on Indian trust lands is appealable to the Tribal Council, who retain[s] the right to overturn any action taken by the City (see Zoning Code 94.11.00).”

On August 10, 2015 the Desert Sun newspaper reported that construction fencing had been erected around the Ramon Drug Building, “presumably to keep the building safe.” In the Desert Sun article, PSPF president Erik Rosenow was extensively quoted about the architectural importance of the building.

On April 6, 2015 the Desert Sun newspaper ran an article entitled “Palm Springs Modernism Fans Fear Losing Another Wexler,” which again reported on the controversy and “the potential destruction” of the Ramon Drug Building. PSPF board member Ron Marshall was extensively quoted in the article commenting that “the fluidity of the concrete creates that deep eave,” one of the Ramon Drug Building’s most notable features. Marshall went on to emphasize the architectural significance of the structure citing the building’s appearance in the 2004 city-wide architectural survey.

On April 1, 2015 a Desert Sun newspaper article later clarified the ownership of the property stating that “a spokeswoman for the Agua Caliente tribe said the property was not under the tribe’s direct control and was therefore a private real estate matter between a landlord and tenants.” The article further reported there were 22 landowners.

On March 30, 2015 local television station KESQ reported that “nearly a dozen…tenants” located in the Ramon Drug Building had been “slapped with an eviction notice.” Reportedly, the eviction notice required that the business owners vacate by May 31, 2015. KESQ further reported that the “building sits on Indian land owned by members of various tribes” (possibly meaning various families). 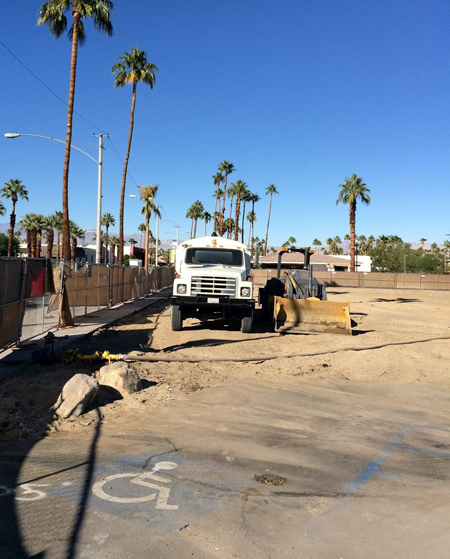