An early experiment in condominium living, Park Imperial South was designed by modernist architect Barry Berkus in 1960. The units are notable for their folded plate roofs, terrazzo floors and their creative use of concrete block. The original condominium design was skillfully zoned and executed with floor to ceiling windows and sliding glass doors overlooking private walled courtyards. The condominium walls facing public spaces were designed with clerestory windows sitting above decorative concrete block walls.

On October 5, 2016 the Palm Springs city council voted unanimously (4-0-1) to make Park Imperial South the city’s sixth historic district. PSPF board member Ron Marshall made public comment in support of the designation. In part, Marshall commented that “The foundation enthusiastically supports [this]…designation… and further commends the hard work and research done by preparer Peter Dixon. PSPF has [had] a very positive relationship with…Park Imperial South…[and] in February of 2011, Park Imperial South received a PSPF grant to underwrite the cost of restoring a decorative concrete block wall that had been partially demolished by a previous owner. I’m happy to say that the grant spurred additional investments in the complex and helped engender a fuller appreciation of the architectural significance of Park Imperial South.”

On August 19, 2014 the Park Imperial South Homeowners Association advised PSPF that the 2011 PSPF grant had inspired the restoration of walls in three other units in the complex. Additionally, indications are that other unit owners may likewise restore walls that have been unsympathetically modified.

In November 2011, the Park Imperial South Homeowners Association (PISHOA) announced that it had successfully completed the work funded by a PSPF grant for the reconstruction of a decorative concrete block wall at one of its condominium units. Homeowners association president Jimmy Verrett applauded PSPF’s assistance in this effort and hopes that the successful completion of this demonstration project will “spur enthusiasm for the reconstruction of the remaining walls and the restoration of Berkus’ original vision.”

Architect Barry Berkus’ commented on the successful completion of the grant as follows,

“I am proud of the many ways you [the homeowners association and owners] are sustaining the original thoughts that make Park Imperial [South] unique in its being. It is seldom that a group of owners in a project of your size will take as much time and care in revisiting the original architectural fabric.”

The reconstructed concrete block wall can be seen from South Araby Drive.

On February 14, 2011 PSPF awarded a $1,400 grant to the PISHOA to fund a demonstration project to reconstruct part of a concrete block wall at one of its condominium units hoping the PSPF-funded project would inspire and motivate other PISHOA homeowners to make similar investments (six other units have had portions of their block walls replaced with picture windows). According to PSPF board member and architect Jim Harlan, “the net effect [of these partial demolitions] has been to compromise the massing and rhythmic flow” of the architecture. 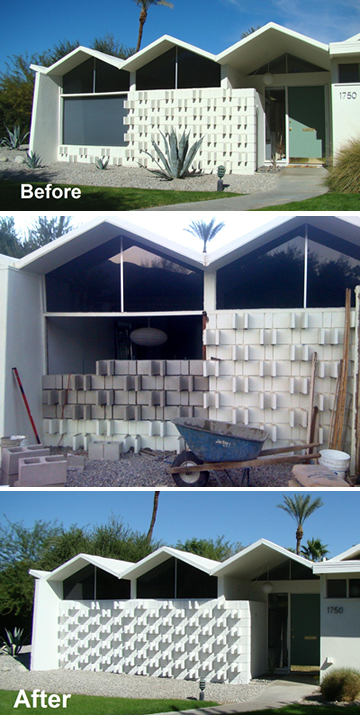