On April 24, 2021 PSPF was informed that the benches and trash receptacles in front of Palm Springs city hall had been restored to their original (brown) color.

In a January 25, 2021 letter response, Public Arts Commission Chair Ann Sheffer stated “I realize that somewhat different criteria apply to the benches at City Hall — and I certainly agree that we should have raised the issue with HSPB….This was clearly a lack of communication on our part, and I apologize for not contacting them…” To read the Public Arts Commission letter click here.

On January 13, 2021 PSPF sent a letter to the Palm Springs city manager objecting to the recent “temporary” installation of public art on the benches and trash receptacles at the Palm Springs city hall. The letter opined that, “These are utilitarian objects and to decorate them is a visual distraction, especially to a building lauded for its sublime architecture.” The letter reminded the city that PSPF had “fought a lengthy advocacy battle” to have the entire site designated as historic, not just the city hall building. PSPF’s letter also objected to the apparent procedural error which occurred when the city failed to have the art installation reviewed by the city’s Historic Site Preservation Board. To read the letter click here.

On March 7, 2012 the Palm Springs city council voted 4-1 (Lewin, Foat, Hutcheson and Pougnet supporting) to adopt Resolution No. 23106 which “amended” the historic site designation of the city hall site to “end at the curb of the North end of the rear City Hall parking lot, so not to include the dog park, the Co-Gen facility and landscape area, and the El Cielo Road right-of-way and to exclude all City Hall landscaping from the historic site designation.” This decision was a noteworthy preservation victory as it resolved a long-standing debate about the scope of Resolution 18907 which originally designated city hall as a Class 1 historic site. The amendment clarifies that the site designation includes the entire parking lot (which PSPF has always contended is an important component of the site). This decision now requires that proposed changes to the city hall site, and not just the building, undergo review by the city’s Historic Site Preservation Board.

On February 15, 2012 PSPF board members Gary Johns and Ron Marshall made public comment regarding a proposed amendment to Resolution 18907 that would “re-designate” (and narrowly define) the city hall site. Both Johns and Marshall argued that recent staff interpretations of Resolution 18907 were not only flawed but motivated by a desire to “paper over” an administrative error made when the city hall parking lot reconfiguration was not sent to the city’s Historic Site Preservation Board (a view held by the city’s own Planning Commission). Also making compelling public comment were Chris Menrad of PSModCom and PSPF members Robert Stone and Barbara Marshall.

On September 8, 2010 the city’s planning commission voted unanimously 5-0 (with 1 absent and 1 abstention) to uphold the appeal of six citizens (including PSPF board member Gary Johns) who had asked the commission to overturn the planning director’s approval of “MAA 3.3377,” an unnecessary and historically damaging plan to reconfigure the city hall parking lot and site. PSPF President Ron Marshall and board member Gary Johns, along with PSModCom board members and other concerned citizens, made compelling public comment.

On August 23, 2010 PSPF sent a letter to the Chair of the city’s Planning Commission detailing recently uncovered information that identifies famous modernist landscape designer Garrett Eckbo as having been involved with an early landscape design of the city hall site. To read the letter click here.

On July 13, 2010 the appeal to the planning commission on the city hall parking lot reconfiguration issue was re-scheduled to September 8, 2010.

On June 8, 2010 representatives from both PSPF and PSModCom met with staff members of the city’s engineering department to discuss a proposed redesign of the city hall parking lot. While the redesign addressed some of the more egregious issues previously raised (like cars directly blocking sightlines to the city hall), the proposed redesign still significantly alters the “historic hardscape” of the site. PSPF and PSModCom representatives repeatedly stressed the importance of keeping the city hall site intact.

On March 10, 2010 at the hearing of an appeal to the Planning Commission (submitted by PSPF board member Gary Johns and other concerned citizens) the city’s Director of Planning Services informed the commission that the city had decided to explore a “redesign” of the proposed parking lot reconfiguration that might eliminate the objectionable proposed parking spaces blocking the front of City Hall. It is hoped that any redesign will mirror the current parking lot layout.

On February 9, 2010 the city’s Historic Site Preservation Board (HSPB) finally discussed PSPF’s August 2009 letter. The HSPB then unanimously voted to have city staff prepare a recommendation to the city council to declare the city hall an historic site (not just an historic building). The board then issued a stay of demolition for 90 days (with a potential extension of another 90 days) for the city hall site to include the parking lot.

On February 8, 2010 a group of concerned citizens (including PSPF board member Gary Johns) submitted a letter to the Planning Commission appealing the city’s January 25, 2010 decision (Case No. 3.3377-MAA) to proceed with the ill-advised parking lot reconfiguration. The appeal notes that, (1) an important historic and architectural resource (city hall) is impacted, that (2) the proposed project is poorly designed, and that (3) the project is fiscally unsound. The appeal letter also emphasizes that the proposed project’s more praiseworthy sustainability aims (e.g., a sustainability demonstration garden) can be easily achieved without negatively affecting the city hall site.

On August 23, 2009, PSPF sent a letter to Mayor Pougnet strongly objecting to a proposal to reconfigure the parking lot of the Palm Springs City Hall. The City Hall designed by Clark, Frey & Chambers (1952) is one of the icons of the city’s modernist architecture. The proposed reconfiguration blocks sight lines that have been in place for more than fifty years and trades a view of great architecture for a line of unsightly car grills. Please take a moment to read the PSPF letter to Mayor Pougnet for a more detailed explanation of the issue. 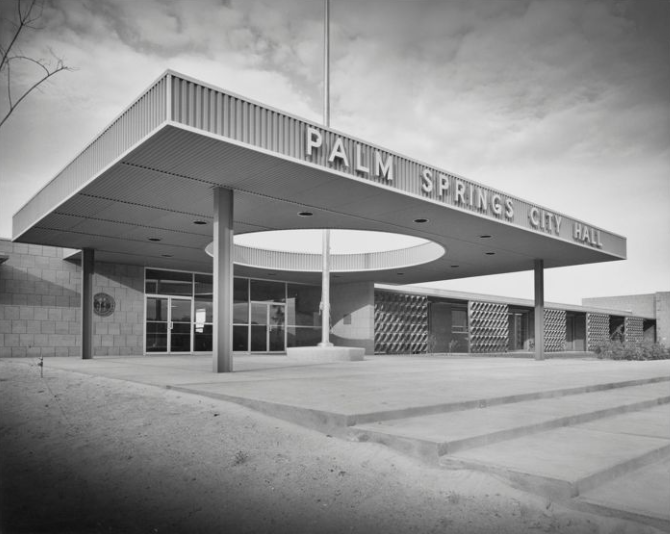