The Kocher-Samson Building (1934), designed by architects Albert Frey and A. Lawrence Kocher, is considered Palm Springs’ first modernist international-style building. The client, Dr. Jacob John Kocher, was an early physician in Palm Springs and the brother of A. Lawrence Kocher. In October of 1935, photographs of the Kocher-Samson Building were shown at the Museum of Modern Art’s exhibition Modern Architecture in California in New York City.

On July 11, 2012 the Palm Springs city council unanimously approved the Class 1 historic site designation of the Kocher-Samson Building. During public comment PSPF board member Erik Rosenow opined that “the historic designation of this important modernist building is arguably long overdue,” a sentiment later echoed by a city council member.

On April 10, 2012 the city’s Historic Site Preservation Board voted 5-0 recommending that the city council designate the Kocher-Samson Building a Class 1 historic site. PSPF board members Patrick McGrew (who authored the scholarly nomination) and Ron Marshall made public comment in enthusiastic support of the nomination. The HSPB’s recommendation included the entire site in the scope of the nomination.

On September 22, 2008 PSPF President Ron Marshall made public comment before the Palm Springs Architectural Advisory Committee (AAC) regarding a proposed unsympathetic addition to the historic Kocher-Samson building. The AAC voted unanimously to send the proposed addition back for “restudy” and recommended that the owner of the building consider restoring the historic property.  Read the PSPF Comments

The Class 1 Historic Site nomination of the Kocher-Samson Building was submitted in February 2008 by architect Patrick McGrew. The HSPB inexplicably held the nomination in abeyance and then deleted the building from its 2008-2009 priorities list because, according to the HSPB chair, the owner “does not desire to pursue designation at this time.” 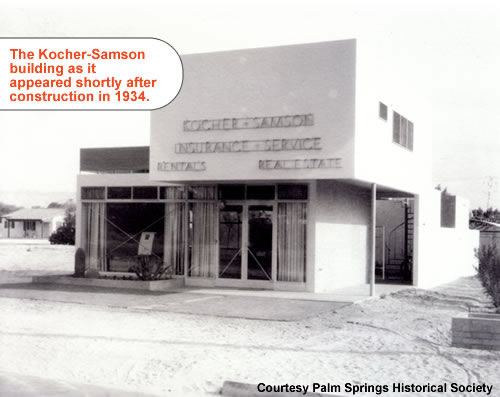