The Mr. & Mrs. Carl E. Haymond Residence was constructed in 1964 and designed by the architectural firm of Frey & Chambers. Carl Haymond was a prominent TV and radio station owner in the Pacific northwest, who fell in love with Palm Springs and eventually built his dream home in the Las Palmas Estates tract. The home’s most notable architectural feature is the use of cast aluminum grille units to screen out the desert sun. Designed by architect John deKoven Hill, over 170 of these decorative, but functional, grille units are used throughout the residence.

On October 4, 2017 the Palm Springs city council unanimously approved (5-0) the Class 1 Historic Site designation of the Haymond residence. PSPF president Erik Rosenow made public comment in support of the nomination and the city’s mayor kindly lauded PSPF for yet another well-researched and interesting nomination.

On June 13, 2017 the city’s Historic Site Preservation Board voted unanimously to recommend to city council approval of the Class 1 Historic Site designation of the Haymond Residence.

On April 5, 2017, PSPF (acting as agent for the owner) submitted the 44-page Class 1 Historic Site nomination for the Mr. & Mrs. Carl E. Haymond Residence to the city’s Historic Site Preservation Board.

In March of 2017, the Palm Springs Preservation Foundation board of directors assigned the task of writing the Class 1 Historic Site nomination of the Mr. & Mrs. Carl E. Haymond Residence (1964, Frey & Chambers) to board members Ron & Barbara Marshall. 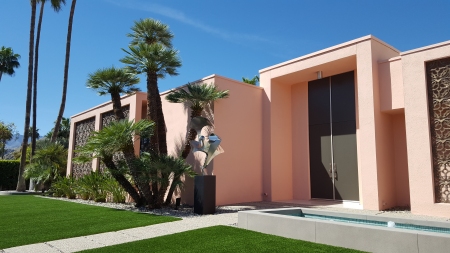